Throughout the day, I often find myself saying to myself and sometimes out loud, "little stinkers", in reference to the girls.

So the girls are napping in their big bed together. I'll chunk them in there and stay close but not in the same room. They had been doing well at going on to sleep. Well then they determined that nap time can be an extension of playtime. And a few days last week they didn't even sleep, and like I mentioned last week, that's when Teagan went overboard and got a big goose egg.

Well today those "little stinkers" were at it again so I went in and rocked in the chair so that I could have a watchful eye and so they would go to sleep already! While I rocked, I caught up on all my blogs and emails and texts, I looked through the photo gallery on my phone and wanted to share a couple.

The girls love to hid in this armoire in our room that has a bunch of sleepwear that I rarely use but got when Price and I got married. Well Teagan insisted that she wear one and actually slept through the night with it on. The next morning I snapped a quick picture. You can see she just woke up and decided she was not camera ready! 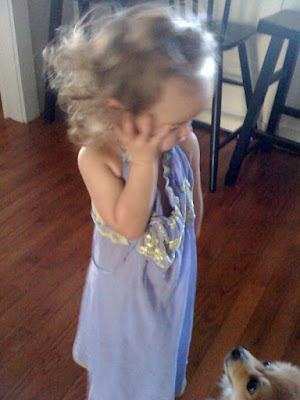 We went to Kroger and Presley loved pushing this cart around. She thought she was sooo grown up! She wanted everything in her basket and by the end, I was having to stoop over to help push because it was so heavy. Unfortunately the Kroger by us doesn't have the minicarts for kids. 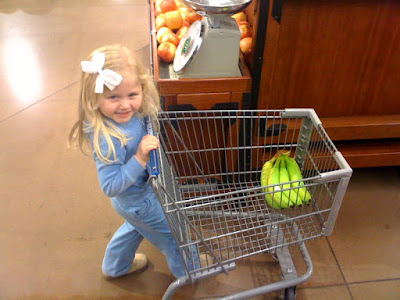 Price's mom, Honey, gave us all these old VHS tapes and the girls enjoy watching movies on the little tv, that Honey also gave us. We put it in our room "just for know".... it's still there totally driving me a little crazy. But look how cute these sisters are sitting together enjoying a show. I think they are watching Annie here. 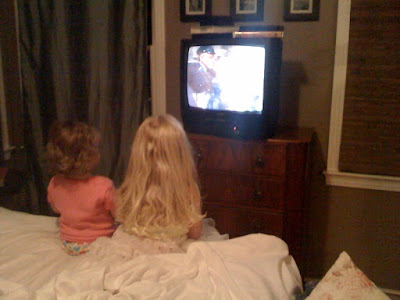 Well I meant to get this posted yesterday in a timely manner. However, me ≠ timely.

But I do hope everyone had a lovely valentine's day.

It was really just another day around here. After church (which we are trying to get back in the habit of going regularly, we got into a lazy routine on Sundays (really the lazy started on Saturdays and continued into Sundays!)) we went to OE's volleyball tournament. She's on a club team and they are GOOD and the game was very exciting even though they lost. (Does anyone else but me think they bring bad luck to teams?)

Then we went to eat with everyone. Then we came home, the girls were begging to go to bed at 7:30 since they didn't have a nap. (And by begging I mean, acting a fool from the lack of sleep.) Then Price and I had a romantic evening on our respective computers on opposite ends of the house. I will say that I'm not one for making a big deal about hallmark holidays. Price did try to get me a thoughtful gift, but after I didn't really LOVE it, he's going to take it back and "never get me anything again". It was 120 bucks for me not to be in love with it. Do you know what I could do with 120 bucks?? A lot! Did I mention I was wrong about the fact that my other dog didn't blow a coat too? She does in fact. So not only have I lived in Dog Hair Hell for two weeks, I get to live there another couple weeks.

We did go to a Valentine's Day party on Saturday night at my brother-in-law's parent's house. It was for the kids mostly, with a dance contest, disco ball, and very loud music, but had yummy fatija's and some delicious desserts for the grown ups! We went last year and it was another fun party! When it was Presley's turn to dance, she kind of froze, so I got a little closer and helped her feel the beat, unfortunately I got right in front of Aunt Addie's video camera, and she emailed me the footage the next day.


And Price says I have no rhythm. hehe (I really contemplated posting that, but thought what the hay, this blog is about being myself.)

Then my bro-in-law's grandpa called me, and I quote, 'hefty', just before we left. A parting gift, I guess. And I spent the rest of the evening thinking maybe I shouldn't have eaten so much. But like I said, it was yummy!!

Anywho, the reason I even started this post (before I turned into a therapy session airing all my dirty laundry/dance moves) was to show this cute bookmark that I made for Presley to put in her Valentine's Day party treat bags for her classmates. Afterall, there's nothing Presley likes more than pictures of herself. We are going to have to work on that child's humility. I'll cover the humility, and I'll let Price teach her some dance moves!!

Posted by PointerFamily at 1:06 PM No comments:

Yesterday, we woke up to a beautiful blanket of snow! Presley had school and immediately instructed us to wait for her to make a snowman. So after went went to her Valentine's Day party, we came home, got bundled up and ventured out to play in the snow.

A little back story. Around Christmas, it snowed a little and we tried to build a snowman with the girls to (per Presley's request). This is what we got. Yes, that little thing on the fence. The girls hated every minute of it. Although they thought it was a good idea to start. And at this time it was more like ice. 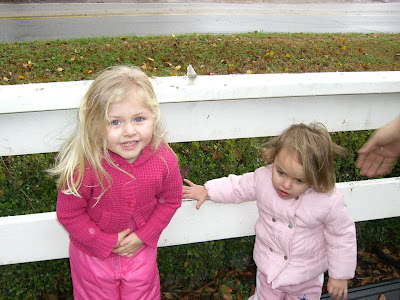 Yesterday, this is what we built! We got this fun snowman kit free from the Children's Place with a purchase. When I got it, I thought we'd never use it in Texas. (And yay for procrastination! Because all our Christmas bins were still at the house and not where they should be - in storage, since we have no garage and no attic space). 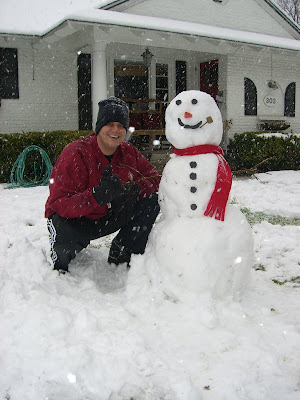 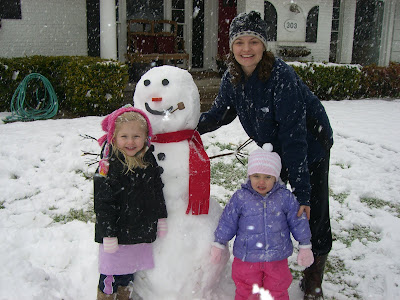 We later put a hat on him.
We also had a "fight" (snowball fight), as Presley called it. Price and I enjoyed that more than the girls. Teagan was laughing so hard as me and Price threw snowballs at each other. Presley threw her share though. And each time, she would say, "are you ready for this?" Little smack talker, just like her daddy!! We live on a busy street and some care pulled over and took a picture of our snowball fight.
The fun didn't stop there. Once we went inside and were going to put the girls down for a much needed nap, I got a call from our friend Monica who said they were going to go up to the park to slid down the hill on tubes. So we joined them. I didn't get any pictures unfortunately. It was really cold and I mostly tended to the girls. We pulled them around in a laundry basket a couple times and Presley went down many times by herself and I went down with her a couple times. My sister, Chloe and Madden joined us and Chloe managed to loose their keys in the snow. So we had to hitch a ride and then get her spare key before the roads got bad. I still want to find a steeper hill and have some more fun in the snow!! The girls hit a wall with all the cold, the lack of sleep, and the overall over stimulation. So they had a warm bath, a quick dinner, and went to bed early!!!
I enjoyed the snow, my girls, my whole family, good friends and just the beauty of it all. I couldn't help but to feel the presence of God with us! What a blessing! Amen!
I want to get out in it again today, but I'm still working up the gumption!!
Posted by PointerFamily at 8:10 AM 2 comments:

Well Weegie has had a rough week this week. First she fell off the bed (over the bedrail) before they actually went to sleep for naptime on Tuesday. Probably from doing something like this. (I was just in the next room and heard the fall.) Umm, not sure what Presley's problem was in this picture. 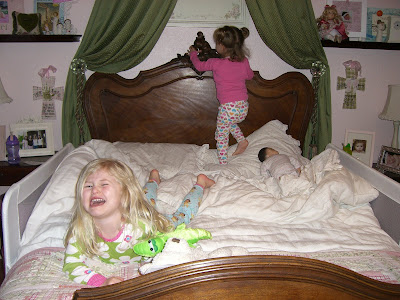 Here you can see her poor little foreheard. And this picture does not do it justice. It was MASSIVE! 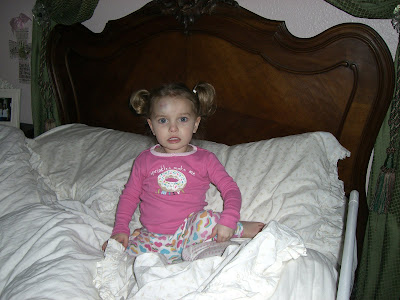 Her rough patch wasn't over there! On Wednesday the girls were having fun, running through the house, chasing each other and when Teagan tripped and fell, so did Presley. Right on top of Teagan's head. When the dust cleared, Teagan bit right into her lip. There was blood and a big gash, so we headed to the ER for stitches. But the doc said it didn't need any after all. So we headed back home. 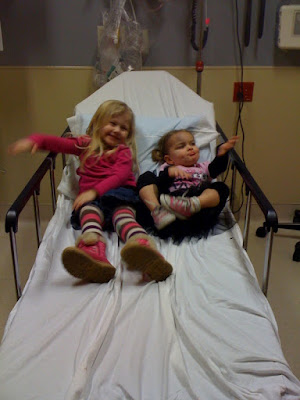 Needless to say, I was a little embarrassed of all Teagan's injuries at Presley's preK Valentine's Day party. But what can you do!? (Except leave her hat on during the party? Which I totally contemplated! :) ) 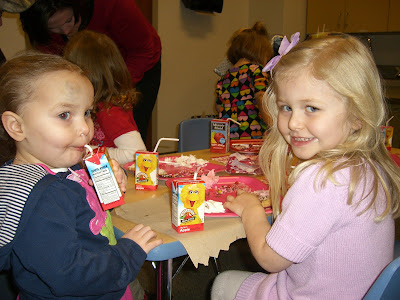 Posted by PointerFamily at 7:49 AM No comments:

Does anyone know what that phrase means? If not, let me tell you. Twice a season, one of my dogs "blows a coat". For us, this means her fur comes out in clumps all over the house, I'm assuming as she gets ready for summer, even though it seems a little early since it's still so cold outside.

Usually this means an immediate visit to the dog groomer for a military type haircut. Instead, I dug out the dog brush and brushed her hair so that I wouldn't have to sweep it up, peel it off the couch, and brush it off the bottom of all four legs of every chair we own over the next several weeks. I'll have to continue to do it every day, until she's done blowing her coat.
This is the big pile of fur I brushed off of Foxy today. And I could have kept going. (Foxy's in the background praying that beauty shop hour is OVER!) I was just about to sweep, but you can see her hair all over thanks to the lovely natural sunlight (which shows no mercy to this house cleaner). 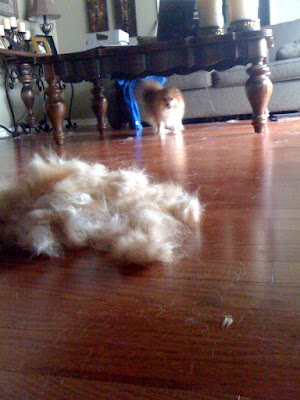 Posted by PointerFamily at 1:47 PM No comments: