Posted by PointerFamily at 6:48 PM 3 comments:

Posted by PointerFamily at 6:31 AM No comments:

Hard to say no especially since I'm sure the novelty will wear off soon.

Sister's back at school today and couldn't wait to tell her friends and teacher that her littlest sister was born yesterday. We printed a picture just on regular paper for her to take.

This is from after school and just before she got to have HER turn holding lil Temp.

So far Temple has been pretty mellow. She slept really well last night and we had to work hard to wake her up to feed her. Since she was so big, we were instructed to feed every two hours to prevent any possible low blood sugar. Well two hours comes along so fast, especially at night! Whew!

It's been fun getting back into the groove of a newborn and an added family member. We've had lots of help so maybe that's why it's been fun! And don't even get me started on the wonderfully delicious food around here. Mama's appetite is back!!

Posted by PointerFamily at 1:31 PM No comments:

Yesterday morning at 7:22am, Temple arrived!

10 lbs and 22 inches with a full head of the blackest hair I've ever seen! Yes, Price guessed that weight! It freaked me out then, and it still does!

It wasn't quite the labor and delivery I was hoping for, but she's here and we're both healthy and that's more than I could ask for!

It was only about a 4.5 hour ordeal, and the first couple hours weren't too bad. It was the last few that kicked a mama's booty! Going to try to write her birth story soon before I forget! Because one thing having a baby reminds me - I'm no spring chicken!

The girls were so proud to be big sisters! And guess what! She's a pacie girl! Whoohoo!

Right now Temple looks like both girls when they were born!

These are just phone pictures. Aunt Mac was on camera duty so the morning was fully documented.

Posted by PointerFamily at 1:32 PM 2 comments:

Today I am 40 weeks. Temple has still not arrived! Just like her big sisters, she too wanted to be fashionably late!

It hasn't been uneventful around here though. I started with a stomach virus early, early Monday morning. You would have thought I got hit by a bus. Presley came home from school complaining of a stomach ache. After falling asleep early, she barfed all over our bed. It was massive. I'll spare you the picture, but Price did take one for some reason. Anywho, Pres has been a trouper and recovered really fast. (Made me look like a whimp!) Price woke up feeling queasy but powered through his day to get some things done before the baby comes. Teagan has escaped the wrath somehow and thankfully.

Mom braved the germs today and helped me de-germ the house, helped tackle my laundry, went to the grocery store WITH the girls, and cooked us dinner to battle our ailments - potato soup!

With the house clean, I feel like we can now move forward. So, back to waiting.

I have had lots of contractions over the last 24 hours. So I know it won't be much longer!

Posted by PointerFamily at 7:19 PM No comments:

Aunt Mac has the NFL ticket so every Sunday, except last Sunday, we've made ourselves at home over here. The set up is so nice to let the kids play outside while we vegg on the couch and enjoy some fooseball (or blog).

Here's my current view. From the couch.

It's been such a nice day where we can just leave the door open and watch the three little ones play. They have played outside almost the whole time we've been here. They came in while it rained hard, but went back out in the drizzle.

Oh dear, they just found the mud. They're wet, dirty and probably stinky but having so much fun!

And yes, Madden is relaying a message. :)

Posted by PointerFamily at 2:31 PM No comments:

Since we have plenty of time, today we made some guesses on Temple's weight.

My dad (Papa) guessed Presley's weight exactly! So we'll see who's the closest for Temple. We didn't officially make our projections with Teagan. I think I was too scared to even think how big she'd be.

Price's 10 pound guess is freaking me out a little, I must say! He upped it when my mom said I weighed 9# 15oz when I was born and claimed he's never heard that before (but we all know he just doesn't listen).

We didn't make guesses on WHEN this child is going to arrive. But if anyone cares, I think it'll be Wednesday. My theory on that is Presley was three days late, Teagan was two days late, and I'm hoping Temple will only be one day late.

Also, here's where we got Temple's name.

Posted by PointerFamily at 1:41 PM No comments:


Wednesday was fair day. Is it weird to anyone else you get a day off school to go to the fair? Wonderfully convenient, especially since it's on bring three cans and get in for $2, but still odd on a way. We met Addy and fam and Aunt Mac and fam there.

Madden opted for nachos. Is he crazy or what?

We stumbled upon this attraction and thought 'what the hay?' :)

Here they are working.

Basically the kids work the farm and get paid a (fake) dollar they can then use to buy something from the store. All the kids came out with a pack of trail mix. Except Teagan. She came out throwing a fit because she wanted a $30 stuffed sheep. After that, it was time for Daddy a beer.

I hadn't gone through the farm with everyone, instead I stayed in the comfort of my wheelchair. Yes, I embarrassingly (especially when Price was pushing me) experienced the state fair from a wheelchair. He did not account for the foot rest and almost took out several people, not to mention I had to ask several times if he was looking where he was going and put my foot down to slow us. It was such a lesson of control and humility. One, God willing, I won't have to experience again. So I'm thankful for those that put up with me so that I could even be there!

Anywho, at some point between roasted corn and cotton candy, we rode the carousel. (By we, I mean Price and the girls!)

And then the nascar cars.

We were standing around thinking about what we should do next and Manny offered, "I'm not getting any fatter just standing here." So it was decided. Time for more food. Fried butter. Fried PB&J. Fried cheesecake (didn't try that one, but heard to was okay).

Then to the airplanes.

We finished the day with the swan rides.

Oh wait, we were going to end there but we had a couple more tickets so the girls rode a ride they deemed the "best part of the day"!

It was this super fast swing we probably never should have let our kids go on. Dovie did not want to ride because she saw it going before hand. Willa didn't see it going so she was game with Presley and Teagan. And when that ride started, it was the funniest thing ever. She was so scared and it was written all over her little face. But after she realized she was okay and her fellow riders weren't scared, she finally smiled and enjoyed it. Still makes me laugh!

We were so tired by the time we got home. We washed up, ate something of substance and went to bed.

And hopefully we'll get to do it all again next year. It'll take us that long to save up again because, Shazam!

Posted by PointerFamily at 6:45 PM No comments:

I swear she wanted to vacuum and was enthusiastic at first. It didn't last long, but long enough to vacuum up some Cheese It crumbs and cookie crumbs from the other day.

By the way, what do people without dogs do after meals? I've never seen so much food under my kitchen table! I can honestly say I miss Maverick... when it comes to HIS vacuuming abilities!

Posted by PointerFamily at 5:00 PM No comments:

Oh my word! The discomfort is on a whole new level, one of which I have never had the pleasure of experiencing. Thank you Short Torso or Big Baby or Over 30 Year Old Body.

I literally can not find a comfortable position. Am I the biggest complainer in the whole world, or what? But dang!

I saw Tina today. Still about 75% effaced, but have dilated another centimeter for a grand total of four centimeters. Whoohoo! Last time I was a 4 it was a couple days before I had Teagan. So I can do another couple of days. A week though is just depressing! But regardless, I know it all goes by super fast. I might need to go read the book I read to the girls while they're on the pot and having a hard time going number 2.

They request it. That and sometimes a little prayer, but it works! And that's what I need - a positive attitude and to say a lot of prayer!

Tina also said Temple has flipped all the way posterior... Not the greatest of news. She also said that if I was still pregnant by next Thursday at our next appointment, she'll give me the "start up kit". (She doesn't do it until you reach your due date. I miiiight have allluuuuded that I'd like the start up today.)

Presley took this picture this past Friday. It's blurry, but I kinda prefer it that way!

I think my belly has grown since then! Now if you'll excuse me, I'm going to go grab my previously mentioned reading material and get reverend.

Here's what our Sunday looked like. And by Sunday, I mean ALL day long! Presley was making "a library book.". She colored all day! Teagan was less die-hard about coloring, and shuffled between puzzles, playing with her baby, dressing up like a ballerina, and a few shows (when football wouldn't cut it).

Price and I watched football (we are both on fantasy leagues) and colored, puzzled, and all round just catered to the girls.

Overall we all huddled around the coffee table, the central hub of the house. It was a perfectly lazy day.

Posted by PointerFamily at 6:29 PM No comments:

Does she not look so big?? She is about to turn four at the end of this month, which is just hard to believe. Teagan has done so good with preschool from day one! No tears, no hesitation, minimal difficulty getting ready to go. On the first day, she even saw a classmate from her old class and asked him, "Hey, remember me?" in her sweet little voice. It was so sweet. She is a social butterfly like her big sister. 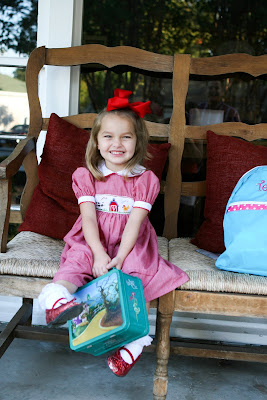 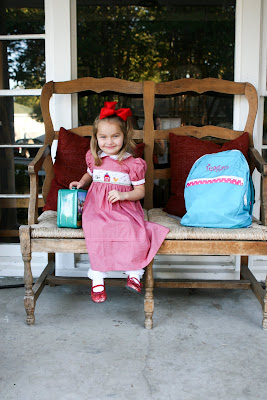 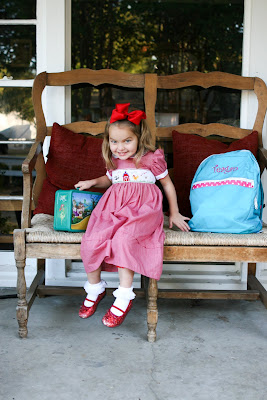 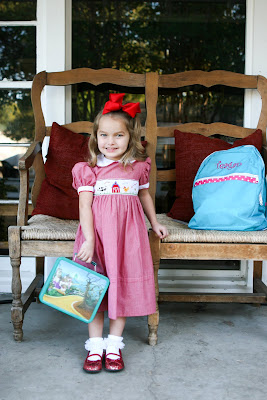 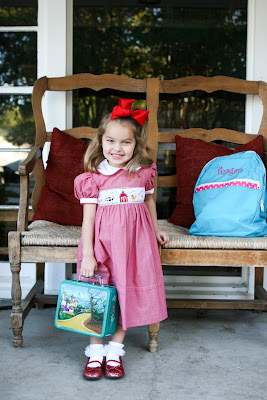 Posted by PointerFamily at 7:09 AM No comments: