Is that a song?? Anyway, we aren't depending too much on the love factor, but we are watering and I've fertilized once.

About a month ago, my friend saw my empty garden boxes and said, "I bet the girls would love to help you grow something in there." Now why didn't I think of that?? They love to play outside, so the next morning we got to work cleaning these bad boys out. There's four of them and they have really good soil! (When we were getting ready for Presley's first birthday party, which we planned for an outside party, we cleaned them out and through some vegetable plants in there. Well it pretty much rained during her party, so everyone was inside. But that wasn't the point of my back story. Those plants grew with such little effort - like we watered when they looked dead. And we got so many tomatoes, bell peppers, jalapenos, we didn't know what to do with them! It's the soil, I tell ya!)

So here's the before. (camera phones are so handy!) 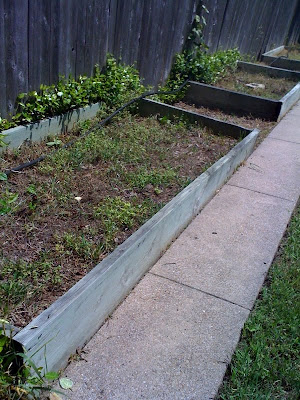 And here's the first box cleaned out (kinda). 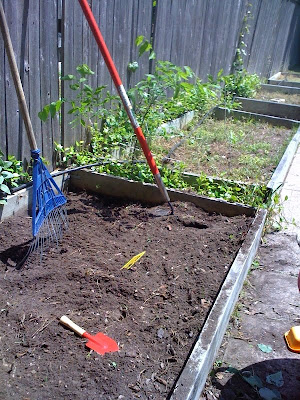 Once they were all cleaned out, I had to wait for the soil to be warm (it must have been during once of those cold fronts), and then a couple days later, we planted seeds this time. We planted squash, tomatoes, cucumbers, bell peppers, and jalapenos. I thought it was funny because the back of the squash packet said something to the effect of "plant and 72 days later harvest." Forgot to mark my calendar...

Things are growing and I just picked all the weeds from a couple of the boxes. So in approximately 36 more days, come over and we can have a squash!

Posted by PointerFamily at 12:06 PM