Teagan is turning three this week and yesterday we had an early-morning-wear-your-PJs Donut Party for her. When you asked her what she wanted to do for her birthday she said she wanted "donuts and a pinata".

So we started off with some donuts and kilaches. 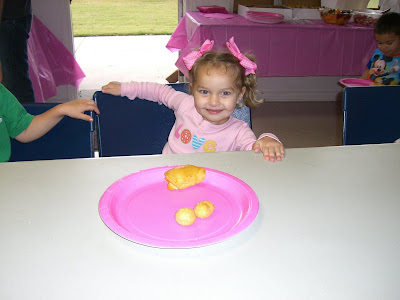 Then we sang the birthday song and she blew out her candles on her donut cake. Wasn't quite the look I was going for, somehow my flash got turned off on this series of pictures. 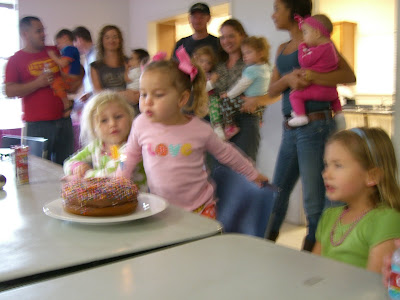 Here's another shot of the cute donut cake, but even this picture doesn't do it justice. Williams-Sonoma has the cutes donut cake mold. 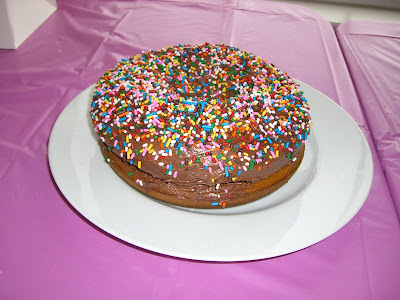 After no one ate any cake (who could blame them, they were plenty sugared up on donuts), we moved on to the pinata. May the season of candy begin!! My sister made the pinata and me and my mom decorated it. So I was a little apprehensive about how hard we could hit it. So we didn't give the kids much of a chance to hit it, but many got a second turn. Turns out it was made WELL! We finally had to rip that sucker apart with our bare hands! 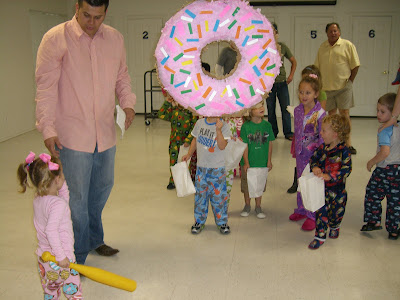 Then we moved on to the presents. But this picture is actually the only picture that I took of the treat boxes. We filled donut boxes with party favors and an apple. I printed stickers for them with a cute picture of Teagan and a word of thanks. You can see them on the table really, really small with no detail whatsoever! (My picture taking at this party lacked. And my little camera is officially dead to me!) 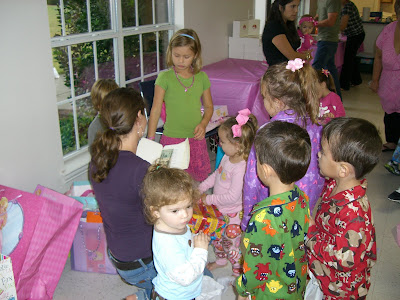 Love this one of Teagan opening presents with tissue paper flying! 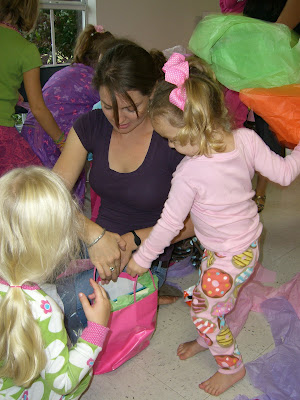 The party was successful! Even desite Teagan spilling chocolate milk on her PJ's before we even got to the party, busting her lip playing rough with her cousin, Madden, while setting up, me putting the wrong address on the invitation (SO sorry to Mike, who brough his three boys by himself from an hour away and was lost the longest), and it being rainy and nasty outside. Thank you to everyone who came and made Teagan's birthday a celebration!
Posted by PointerFamily at 7:54 AM