Just downloaded these pictures on my computer! I've been bad about relying on my phone's camera!

Here's Pres all ready for her first day of school. I wish I could say that she's loving it and things are great, but the last couple of weeks, she's been throwing major fits about not wanting to go to school - at home and during the drop off at the room. And pretty much I've left upset every time too (and embarrassed - that she threw a major fit and that I can't hold it together, even though I did until after she couldn't see me). :( It's just not like her. It happened slightly last year when the newness of school wore off. But NOT like this year! Her teachers say she calms down after a couple minutes and then has a great day. The only thing she's said is that she doesn't want to go because she doesn't know her letters. Which she does know a lot more than she gives herself credit for knowing. I've talk with the director and some friends, and here's what we've come up with:

We've been working on her letters more at home. She's actually more interested lately, so that's good! And I may have bribed her with a special surprise if she has a good morning tomorrow.

At least she was happy and excited for the first day! Although when we rounded that corner and she saw a hallway of moms and kids, her excitement and confidence waned. And then again when it was time to go through the doorway. Broke my heart to see her like that. This is the child that wants give every kid at the water park one of her silly bands. The child doesn't know a stranger. So I had to cry a little that day too! What's wrong with me??

Sporting a new and bigger backpack this year! 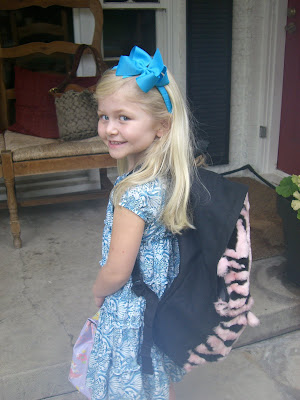 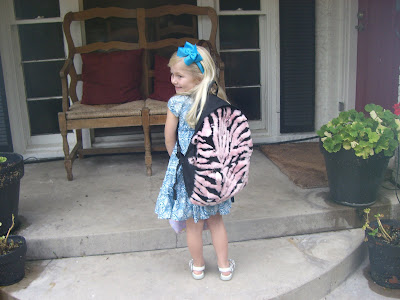 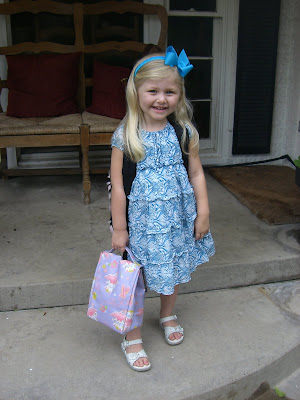 Getting her ready for school is another story! She turns into a pre-Madonna and is very opinionated for a four year old. I don't remember being like that. EVER!
Posted by PointerFamily at 7:40 PM