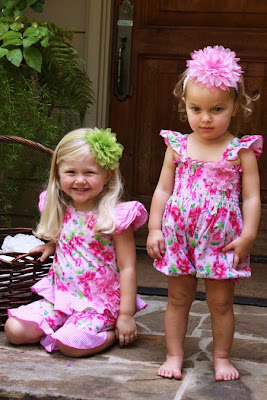 A couple months ago, Presley and Teagan did a modeling shoot for the Baby Nay clothing line for the Baby Nay show room at the Dallas Trade Center. (Price's family is friends with some of the gals that work in the showroom.) I personally was so excited about it! Presley is the biggest ham ever when cameras are involved. And you can't take a picture of anything or anyone without taking one of her too! She really knows how to work the camera. And I knew she was going to do great! Images of her paying for her own college flashed in my head. Not that this was a paying gig, but still...

They said there was no pressure for Teagan, if she did it that would be great, but if not, no biggie. They know my Weegie! Well, Pres did great, Teagan finally warmed up about an hour before we had to leave, so I wasn't sure how the pictures turned out.

We never heard from them (despite my desperate attempts to find out where they were to be uploaded). Then I get a call from Jen, the organizer of it all, and she said that the Baby Nay rep picked a picture of Presley and the 5 year old to be on the advertisement in, by, or around the elevator. FUN!!! So we were going to load up all who wanted to go and see it and get a picture next to the ad.

Well Price, being the ingenious "ugoogalizer" that he is, googled Baby Nay and found ALL the pictures. On their website. Online. He held a special place in my heart yesterday for this discovery. Presley paying for her own college is back on!! And Teagan too.

You can see that I obviously wasn't a very good stage mom because I wasn't fighting to get Presley a bow from the limited supply of sample bows they had. And you know Presley is rarely without bow. So it saddens me that some pics she is bowless because I lack the stage mom aggressiveness. There's always next time!! Hopefully!
Posted by PointerFamily at 1:09 PM