Since Jay and Alison are back in town and live so close, we've established date night. We switch off watching the kids so we can have an hour and a half reprieve every other week. It's. Been. Awesome!

They went first and when I was telling the girls their cousins were coming over because Addie and JJ were going on a date night, Teagan said, "I thought they were already married!?!". So funny! I tried to then explain the concept of date night. But she didn't quite understand the allure of time without baby carrying, kid feeding, butt wiping, fight refereeing, discipline giving, mess cleaning, pacie finding, clothes washing, school prepping. Sure we still have to do some of those things afterwards, but at that point I'm reenergized. I'm cleaning up after three destructive animals with a smile on my face.

Tonight Price and I went to Restaurant Ava. I had the shrimp and grits. It was delicious. I love grits. I wasn't going to get that (Price thinks you can't go to a nice restaurant and get grits), until the waiter said it was their most popular entree. Stop there, you had me at grits!

We also enjoyed a couple of beers. Yes, that's beer. Looks gross, but was actually really good. It obviously doesn't take much to make me happy - beer and grits!

Here's to date night and uninterrupted time with your loverkiss. 😉 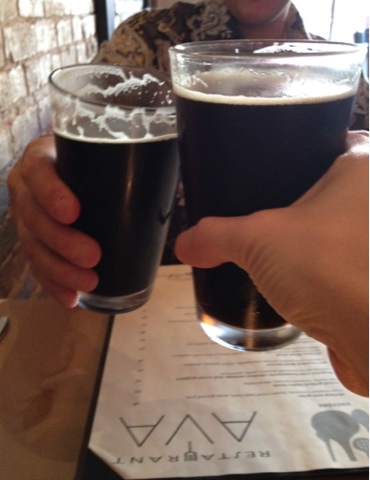 Posted by PointerFamily at 7:25 PM