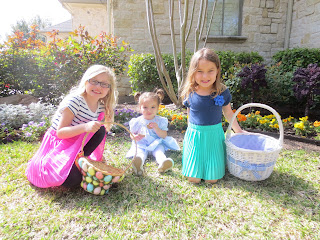 Easter we went to Aunt Shelly's to hunt eggs.  Us girls had just all gotten over strep, but poor Dad was still sick.  We left him home alone with 102 degree fever.  Aren't we sweet?  We would have stayed with him, but the girls were looking forward to going for weeks and there was just no way to deny them.  They had a blast and came home with so much loot, we are still eating Easter candy!  (Even Temple sniffed out the candy bowl and will bring me something to open every now and again.  And by that I mean, several times a day.) 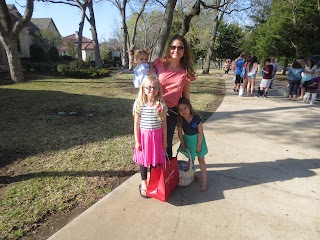 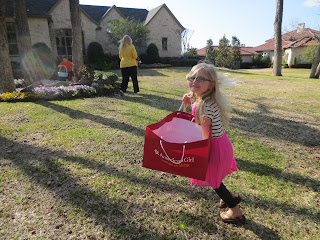 Teagan politely stopped for a picture.  Thanks, babe. 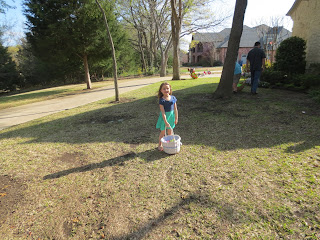 After picking up a couple eggs with candy in them, Temp decided to just sit down and enjoy some chocolate.  Poppa was on opening candy duty.  Temple shoveled it in.  When Poppa cut her off, she looked for Honey to open some next. 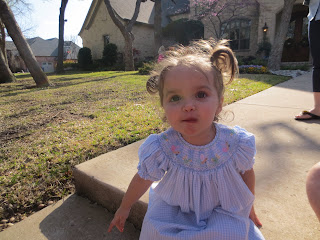 Aunt Shelly said a nice prayer before we dug in and ate like kings.

The following weekend we celebrated Easter with my family.  Mom made matzo ball soup, "tiblets and smalts", and all the fixings my grandma used to make.  I tried to google tiblets and smalts to check the spelling, but couldn't find it.  Basically it's a Jewish meal my grandma's mom used to make.  It's chopped onion, chicken liver, chicken fat, and a hard boiled egg.  Sounds delicious right?  You eat it on a buttered matzo cracker.  And I throw a dash of salt on it right before it goes into my mouth.  Just to round it out and have high cholesterol AND high blood pressure.  It's actually really good!  And you feel all ethnic and close to Jesus when you eat it!   You just wouldn't want to have a really close, intimate conversation with anyone afterwards.

The kids played outside and Temple enjoyed the swinging like this.  She only fell on her head once. 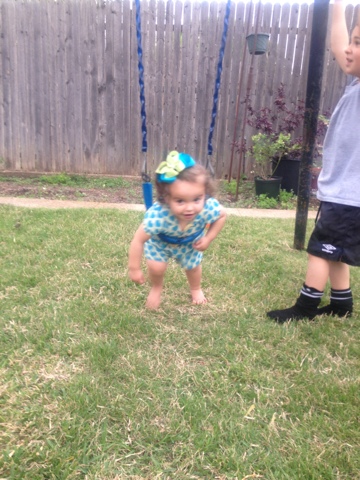 Posted by PointerFamily at 9:45 AM